The new per-share price valued SmileDirectClub at around $8.9 billion. For the Nashville-based company, that new valuation was rich and welcome. By pricing where it did, SmileDirect raised over $1 billion with minimal dilution, at least compared to what it would have cost the firm to raise the same sum at its old valuation.

That prior valuation was a fraction of the firm’s IPO worth. Indeed, when SmileDirectClub last raised known private capital, back in October of 2018 (just one year ago), investors valued it at a smidge under $3.2 billion after counting the value of the $380 million infusion.

Given that the company managed to squeeze a 178 percent gain in value in under a year when it went public, perhaps we should have better forecasted what came next. 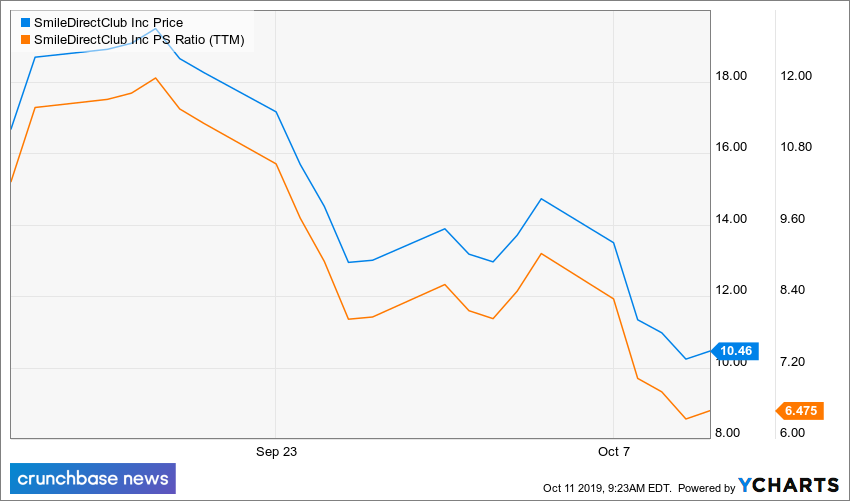 As we reported at the time, SmileDirectClub’s shares were instantly spat out by the public markets, closing at $16.67 on their first day of trading, a 28 percent decline.

Today the company is worth just over $10 per share, off 55.5 percent from their IPO price ahead of trading today. That’s a stunning repudiation, bringing the company to a somewhat embarrassing private-public value inversion. SmileDirect is in danger of seeing its public valuation fall under its final private valuation:

It’s not there yet, but the value of SmileDirectClub today is a shadow of what it was when its bankers got its IPO put together. (Oddly, this result is an endorsement of sorts for the traditional method of determining the value of a company. If SmileDirect had been valued fairly, it would have raised far less capital in its debut.)

One last thing before we go. If you observe the above chart, there are two lines. The orange line corresponds to the far-right axis. It’s SmileDirect’s trailing price/sales ratio. More simply it gives us a good idea of how investors are valuing the company’s top line.

As you can see, early in its life as a public company, even down from its IPO price, SmileDirectClub was able to garner a double-digit revenue multiple. Calculated on a forward basis that metric would shrink some, but a better question is why the firm was valued at over 10x revenue to begin with?

In retrospect, SmileDirect has all the things that public-market investors seem tired of:

We’re keeping an eye on SmileDirect, and will report if it does dip below its final private price. Sadly the company doesn’t report earnings until November 12th, so we still have a while to wait for new numbers.