After a fascinating public debut through a direct listing, Slack’s share price has given up ground. It’s a topic that we explored last week, outlining a few different options regarding why Slack has drifted south as a public stock. (Erin Griffith from the New York Times weighed in as well, noting that the company, lacking a lock-up period, could have a different post-IPO trading pattern than we’re accustomed to.)

Best among our three guesses was the idea that Slack was possibly overvalued by the market at first, and that its declines from as high as $42 per share to the $26 range were merely foam coming off the latte.

I think that’s more correct than I imagined at the time (bear in mind that Griffith’s argument could hold true concurrently). I couldn’t put the idea down so I did a little research today to provide a visual look at the difference between how Slack is still valued after its declines and the relative revenue multiples of a few other SaaS companies.

My goal was to generate a striated look at the various price/sales multiples of firms that I knew so that I could better understand where Slack slotted in. Behold: 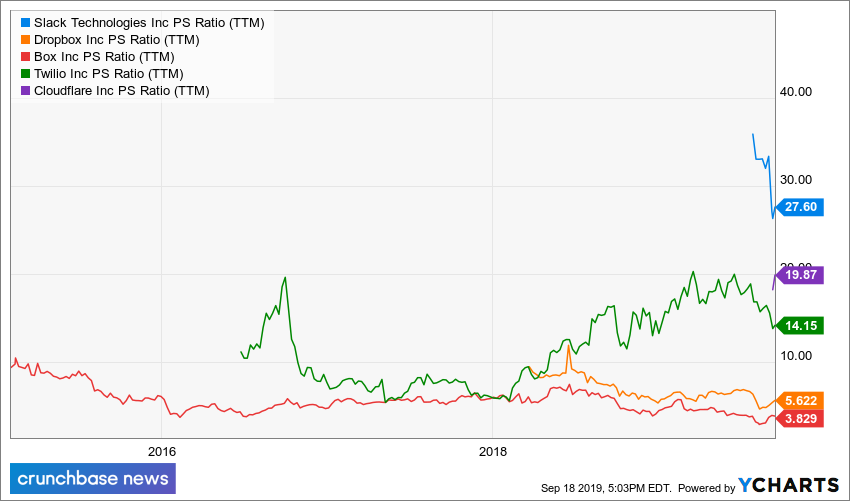 There are four groupings on this chart. The bottom two squiggles form the first. The red and orange lines represent the revenue multiples endured by Box and Dropbox, two leading firms in the early unicorn era. As you can see, the market is not super stoked about their growth profiles; if it was, they would trade for higher multiples.

The green line is Twilio, a firm that has seen massive value accretion as a public firm, but as you can see has coupled that valuation to strong revenue growth. That Twilio’s revenue multiple is curving down in its middle-age is not surprising.

The little purple line is Cloudflare, a brand new IPO that priced above its raised range and opened sharply higher. Look at its lovely, trailing revenue multiple!

And then there’s Slack, up top. As you can see, it’s valued sharply higher on a price/sales basis than even Cloudflare. Despite losing quite a lot of altitude, the public market is still valuing Slack far above even the richly-priced new offering. This means that far from Slack losing its shine as a public company, it’s now merely being treated as better than its peers. That’s a change from before when, according to its historical revenue multiple, it was treated like a god.

Why Is Slack Being Treated So Well?

It’s growing at nearly 60 percent at scale (greater than nine-figure quarterly revenue), which is impressive. Its non-GAAP gross margin (we prefer this metric for now as the company’s unadjusted gross margin is impacted by some one-time costs) is around 87 percent. That means that the firm is accreting incredibly valuable recurring revenue.

Continuing, the firm’s “net dollar retention rate” of 136 percent is insane; the firm’s extant customers buy lots more of its product over time, generating a natural growth rate that is enviable. And Slack’s enterprise penetration (measured by looking at its number of customers with greater than $100,000 in recurring spend) is expanding more quickly than its aggregate revenue growth rate. That implies that large accounts are growing as a percent of Slack’s top line despite the Microsoft threat.

All that and the company generates cash from operations, implying it won’t need to raise money from the public markets, limiting future dilution. Investors love that sort of thing. Toss in its big brand and user love, and Slack is a super solid SaaS firm.

Therefore cry not for Slack. Cry instead for the companies slugging it out there trying to sell storage to large companies.

Venture rounds of $100 million and up are still closing at a steady clip. However, deal counts and funding totals have been trending lower over the...

Last year, venture-backed companies in Europe and the U.K. launched a spree of big public offerings. Now, the overwhelming majority of these deals...