The company once valued at $72 billion on the private markets, and supposedly worth $120 billion as a public entity, has struggled since its IPO. Indeed, after pricing at a disappointing $45 per share, Uber opened at $42 before falling further.

Uber recovered temporarily from initial lows, but successive earnings reports that showed slowing growth and large losses seem to have put a pall of sorts over the company. The popular ridesharing concern closed today worth $30.70, 34.8 percent off its all-time highs, and off 5.7 percent on the day. Lyft lost an even larger 7.3 percent today to $45.42, off 48.7 percent from its all-time high.

We care more about Uber as it is the more valuable of the two, and is a global company, making it a better comp for other ride-hailing companies around the world.

Let’s take a peek at Uber’s performance since going public (data via YCharts): 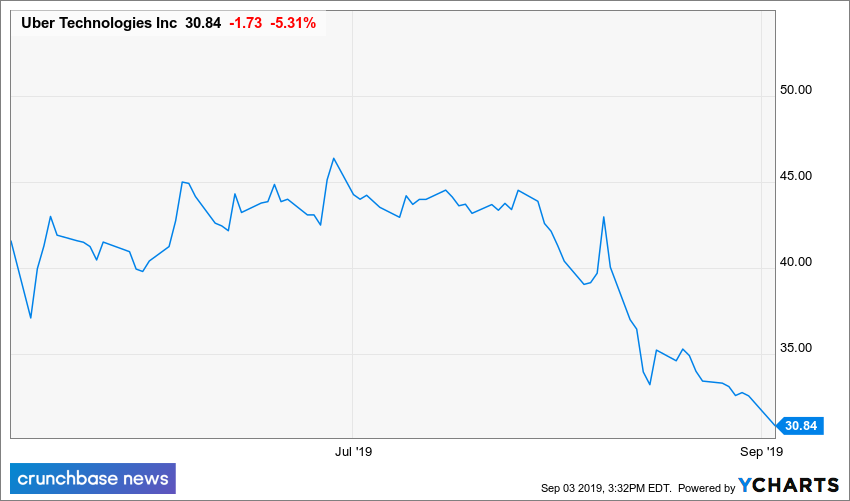 Uber is no longer a private company, so why do we care here at Crunchbase News? It’s a fair question. As always, we’re interested in a public company because of how its performance could impact yet-private startups.

To understand why Uber’s share price matters for all sorts of startups we have to look at history, and at prices. Let’s begin.

Uber’s meteoric growth was so inspiring, market-bending, and seemingly lucrative that a host of startups took it upon themselves to mimic its model. Uber, it famously went, doesn’t even own the cars that power its market place. What a brilliant market for Uber to win, it being able to drive huge revenue for itself while externalizing some costs that taxi companies had previously undertaken.

Copying Uber for a new product, or service took off. The “Uber for X” model became so popular that the method of explaining new services in the context of Uber’s model became a Twitter joke.

As Uber loses ground on the public market, it presents a challenge to the companies who followed in Uber’s wake. Namely how they are going to avoid the same growth trap and cost structure that is causing Uber to lose value on the public markets. (As an Uber rider since it was only black cars in a few cities, I’d love the service to survive, thrive, and empower lots of drivers to generate material profit, in case you were worried I have fallen prey to a case of Uber Hate.)

But while myriad Uber for X have gone out of business (here’s a list of some that died, here’s a VC discussing why the failed, and so forth), there are still a number of companies in the market that are Uber cognates, or Uber comps, that are looking to go public. Which brings us to price.

Uber and Lyft, the first public ride-hailing companies, have been repriced by the public markets. Each is now worth less than it was while private, a key indicator of mismatch between investors on either side of the IPO divide; companies continue to grow after they go public, meaning that they tend to grow in value, all other things held equal. (To see a company quickly lose value after an IPO is a universally-accepted bad sign, even if there are some examples of firms pulling out from such declines and later doing well.)

I am curious what this result will have on two groups of companies: The still-private ride-hailing unicorns (Didi, Grab, GoJek, among others), and the upper echelons of on-demand delivery companies (DoorDash, Postmates, Deliveroo, etc). Uber’s declines likely impact the first group more than the latter. But the second group of companies could take hits as well. We’ve seen, for example, companies like DoorDash quickly accrete value. DoorDash not only has business-model overlaps with the repriced Uber, but competes directly with Uber’s growth business, Uber Eats.

As Uber and Lyft continue to deflate, their performance must weigh on the shoulders of startups who emulated parts of the model that they popularized.

A lot of private companies, startups even, would be in far better shape today in terms of their market positioning as cash-hungry companies that need to raise if Uber or Lyft were trading above their IPO price. A low bar in any market.

Last year, venture-backed companies in Europe and the U.K. launched a spree of big public offerings. Now, the overwhelming majority of these deals...

Mergers & Money: The Instability Of Stablecoins

As TerraUSD kicks around 10 cents, it’s fair to wonder how a so-called “stablecoin” could lose 90 percent of its value in just days.